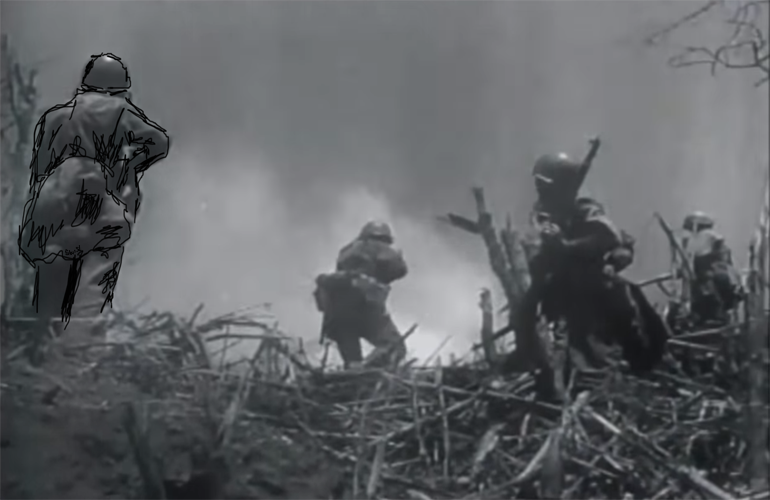 I am the harvest of man’s stupidity.

A raw and gripping dive into the horrors and bloodshed that took place during World War II.  Sledgehammer is based on the memoir, With the Old Breed, written by Eugene Sledge.  Baker’s use of archival footage superimposed by animation highlights the carnage and emphasizes the intensity.  Narration from the point of view of Sledge, combined with the intense archival footage, creates a visceral look at the fear and torment soldiers went through during the Pacific Ocean theater.  Imagine, if you can, a condensed version of Apocalypse Now meets a humorless and haunted version of the narrator from A Christmas Story.

This powerful short does an excellent job immersing the audience into the mind of Eugene Sledge.  “Sledge” recounts the physical and emotion toll of war, both in battle and after the return home.  If the carnage and misery of battle isn’t enough to break you, then perhaps the scars will leave you full of torment and isolation.

The animation style is crude and chaotic, which helps emphasize the emotional tone of the subject matter.  The occasional accent or highlight seen in the form of an outline of a gun, or smoke in the distance, to rapid artillery fire and explosions resulting in dismemberment help emphasize even further the chaotic nature of warfare.  The moment when intensity bubbles to a point of pure chaos also works as a great analogy for a traumatic episode of post-traumatic stress disorder.

A friend pointed out an interesting mixing style involving the voice over (VO).  The VO is not on its own track and thus, is mixed in with the other various sound effects.  As the volume and intensity increases, the VO gets muddied and lost.  This is not a criticism, but another facet of the film’s technique that helps emphasize the larger picture of the message.  The chaos, fear, intensity, overwhelming nature of war devours every ounce of one’s mind and body.

I will have to keep an eye out for more films from this student filmmaker in the future.

Link to the film: